Go! Go! Curry! is dedicated to providing our guests with wholesome, delicious, authentic Japanese comfort food in a pleasant dining experience that genuinely enriches the lives of our guests, crew members, and the overall community we serve. Go! Go! Curry offers a family friendly environment founded on the principles of excellence, empowerment and an unwavering Entrepreneurial Spirit! 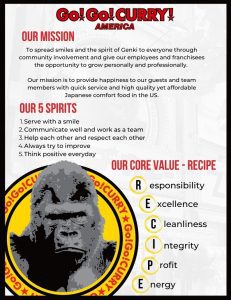 Tomoko Omori was born and raised in Japan. She came to the USA alone to become an actress, where she received an AA degree from college majoring in Drama. She received a scholarship to study music at the American Musial and Dramatic Academy in NYC. When she was performing in an Off Broadway play, her residential apartment was burned in a fire and she lost everything.

Tomoko was then hired to work at a Japanese TV station that broadcast major league baseball. At the time, she had no idea about the rules, but learned from zero. After 4 years of traveling nationwide about 2/3 of the month, she met the perfect man in her life. However, he wanted her to stay at home, so she became a house wife for 3 months. Tomoko and her husband decided it would be best if she returned to work, so she obtained a position in advertising/sales at a local Japanese publishing company. 3 years later, she created a free magazine called Chopsticks NY to introduce Japanese food and the culture.

Now, Tomoko is working in her fourth carrier as a restaurateur. Her restaurant is called Go! Go! Curry!, a grab-and-go Japanese comfort food restaurant. There are over 75 locations in Japan, and the first location in the USA was established near Times Square in 2007. At that time, Tomoko helped the company with their advertising in her magazine. Five years from their first establishment, in 2012, she was asked to be President and joined their company.

After Tomoko took over, in 3 years, her team opened 5 more in NYC and one in Cambridge, MA, and is now launched the franchise business and supporting new franchisees to expand nationwide.

She says, “Our mission is to inspire the spirits of Genki (happy, fine, healthy. energetic and positive in Japanese) with delicious authentic Japanese food. I didn’t have any business or restaurant experience, but I was able to make it in New York with high rent and wages, anyone can make it in anywhere!” She built the operation system to be efficient and productive. The menu is simple and easy to learn and operate so that we can support to people who want to open a restaurant. Tomoko received the Nikkei BP Woman of the year award in 2015. 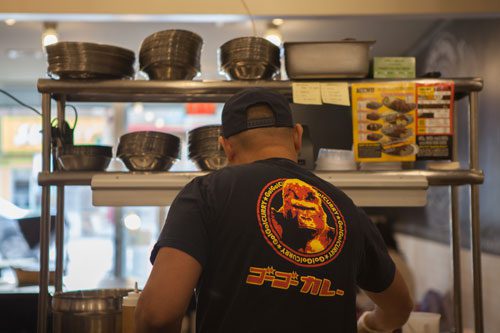 Do you have what it takes?